Alex Garcia is a Senior Technical Writer at Lockheed Martin Missiles and Fire Control in Orlando, FL. He earned two concurrent bachelor’s degrees from UCF: in English—Technical Communication and in Space Engineering Technology. Alex fulfilled a life-goal as a systems engineer for the Space Shuttle Program until he transitioned full time into aerospace technical communication. Throughout the years, he has gained expertise in hardware documentation, proposal writing, and instructional system design for a government audience. In 2005, Alex was awarded the highly sought-after Melissa Pellegrin Memorial Scholarship for Excellence in Technical Communication. An STC member for 13 years, he has held just about every role in the STC Florida Chapter. His relationship with the chapter began as student president of the Future Technical Communicators (FTC) organization at UCF. As a student member of the chapter, he served as co-manager of the student mentoring program. As a professional member, he went to serve as Jaffe Award Committee chair, editor of the Memo to Members newsletter, chapter treasurer for two years, and then two terms as chapter president. For his leadership and dedication, the Society awarded him the Distinguished Service Award for Students (DSAS) in 2006 and the Distinguished Chapter Service Award (DCSA) in 2013 and 2015. Alex presented at the 53rd Annual STC Summit in Las Vegas in 2006 reporting on his experience as a summer intern for Ball Aerospace in Colorado, and he is looking forward to presenting in Orlando as president of the hosting STC Florida Chapter in 2018. 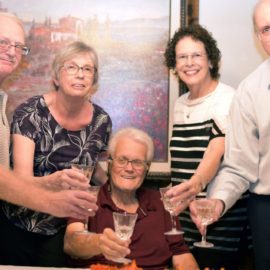 Make a Difference Scholarship Honors Mike Murray and his Legacy

We hope you will join us in networking, fellowship, and sharing of information among passionate technical communicators throughout the state of Florida. We explore and implement emerging technologies while stressing critical core skills— and in the process creating and sustaining a cohesive statewide technical communication community.

Connect with Us on Social Media